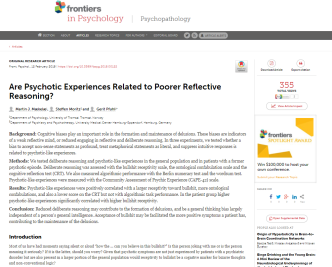 Crickey, here’s a paper to start your week with.

A new paper, published today in Frontiers in Psychology, reports that the more psychotic-like experiences you have, the more receptive you are to bullshit.

Apparently ‘bullshit’ is a technical term.

You are probably going to want to know how science measures “bullshit receptivity”.

It turns out it is measured by the “Bullshit Receptivity Scale” which assesses how deep a meaning you think statements like the following have:

The study also reported that greater levels of psychosis-like experiences are associated with more ontological confabulations.

No, I didn’t know what ontological confabulations were either.

The paper explains that ontological confabulation is a “category mistake involving property differences between ‘animate and ‘inanimate’ or ‘mental’ and ‘physical.’ ” An example would be confusing biological and psychological phenomena such as “An evil thought is contaminated.”

The study measured Ontological Confabulations using the 14-item Core Knowledge Confusions scale. This asks people to rate statements such as “When summer is warm, flowers want to bloom” on a four-point scale from 1 = completely metaphorical to 4 = completely literal.

The conclusion of the paper is that greater levels of psychotic-like experiences are associated with a weaker reflective mind which can “lead to impaired conflict detection, and monitoring of ideas and beliefs” and may “lead individuals to accept questionable information, draw premature conclusions, or fail to challenge and recalibrate their beliefs“.

I will try to have a closer look at this paper shortly, but I think it is fair to say that there is going to be a mixed reaction to it…

2 thoughts on “Is psychosis associated with being more receptive to bullshit?”

This site uses Akismet to reduce spam. Learn how your comment data is processed.